Hello all. I haven't posted here in a while but that doesn't mean I'm not making stuff. I decided to concentrate on game develop...

Welcome to another part in this series. We need to get the basics down of the Commodore 128, and so it is time to crack on with memory management. It is very important for the C128 machine code programmer to understand how this works, and it is more complicated as opposed to the C64, where memory address $01 controlled the ROM/RAM mapping in a relative simple way.


When programming the C128, the following two books are indispensable:

Take a look at this memory map (you can access it here on google drive), and then lets go through this, one area at a time. 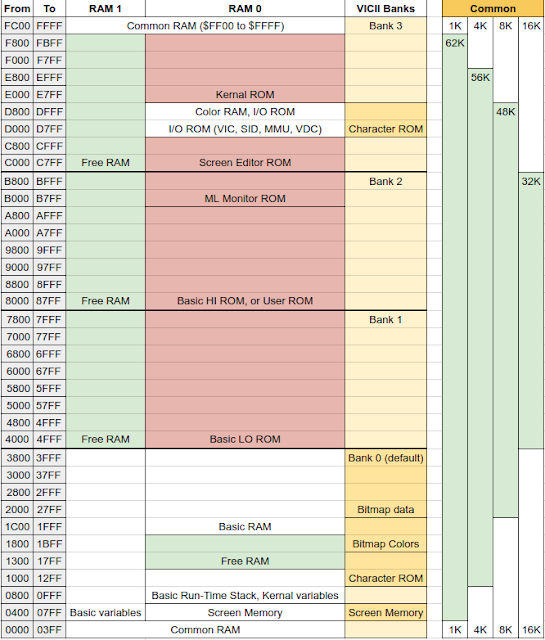 When we look at the RAM0 and VICII Banks columns, we can see the C128 is much the same as the C64. There is a bigger BASIC ROM though, and some areas we know from the C64 have been moved (start of BASIC RAM, location of BASIC variables, screen editor). When we introduce the RAM1 column and the Common areas it starts to become more complicated as there are more combinations to be taken care off.

The bottom of RAM1 is used by BASIC to store variables. The rest is free to use as needed.


The chip that does all this trickery for us is the MMU. Its registers are mapped to $D500 to $D506. This is not inside the default common RAM block, so this introduces the problem that any configuration that maps out the ROM in this area will also make the MMU unavailable.

Commodore solved this by mirroring the MMU registers in the top of memory ($FF00) and force this area common. You should not use locations from $FF00 to $FFFF for code or data. We will use $FF00 and not $D500 for MMU configuration changes.

We will use the MMU in the following examples.


Banking is about two things:
Being an 8 bit processor, the 8502 can only 'see' 64K at a time so there needs to be a mechanism to switch between the RAM blocks. This is done by selecting a bank configuration.

ROM chips can be enabled or disabled. When disabling a ROM, the RAM underneath becomes available for reading. You can always write to a RAM location 'underneath' a ROM.

The BASIC 'BANK' command will select one of 15 configurations that Commodore has prepared. Bank configuration 15 is the default setting, and it provides the configuration shown in the map above.

In machine code, we need to access the MMU directly, and set the bits of the configuration register ($FF00) that we want.  A macro helps with that:

It generates this code when we call SetBankConfiguration(15) :


This will select RAM bank configuration 15 and enable I/O, Kernal and BASIC ROMs. The macro offers the possibility to add custom configurations (see option 99). There is also a configuration (12) that enables the internal function ROM (a free socket on the motherboard can be fitted with a custom ROM chip). I intent to test some ROMs that I have real soon.

In general, try to use RAM block 0 for program code, and RAM block 1 for data.


By default, common RAM is only present at the bottom of the memory map, has a size of 1K, and runs from $0000 to $03FF.  Common RAM always comes from RAM block 0. The configuration of common RAM has nothing to do with banking; choosing another bank configuration does not change the common RAM settings.

If you only need to access RAM block 0, then a good place for programs is in the range of $1300 to $1BFF. If you do not use BASIC then you can use up to $3FFF. But, any program located here making the switch to RAM block 1 cannot continue as this range is outside the common area and therefore unavailable in RAM block 1. The program will crash.

When writing programs that need to use both RAM blocks, you need to put that program (or the part that accesses both blocks) in the common area. This situation was foreseen and Commodore has provided some free space in this area and subroutines for reading and writing data to and from any RAM configuration.

We will take a look at those subroutines in another part.

If your program or data is too large to fit in the default common area, then its size can be changed. It can be 1, 4, 8 or 16K in size. The macro I created to change the size is this:

Also, we can choose to make the top of memory common, the bottom (default) or both. In total we can have 32K of common RAM. This is done by using the following macro:

This will make the bottom 8K common only.


The VIC chip in the C128 is configured exactly the same as on the C64. The VIC chip registers are mapped onto $D000 in RAM. By default, the VIC chip uses the same 16K area as the C64 ($0000 to $3FFF) and the screen and character memory offsets are also identical.

Also, as on the C64, the VIC chip does not see ROM, only RAM. No matter what your memory configuration is, you can use the RAM you selected even if a ROM image is mapped in the same location.

As you can see in the memory map above, the VIC can be pointed to 4 blocks of RAM, also called banks... The following macro accepts a number from 0 to 3:

Which will select VIC bank 0, which is the default. Are you tired of the word 'bank' yet?

Within this 16K block of RAM, we can change the offsets to the character set data and the screen display matrix (screen memory) inside that block.

The offset voor screen memory (screen matrix) can be changed in 1K steps. The macro I created for this is:

So far, nothing different from the C64. There is one new option though: you can tell the MMU that the VIC chip should use RAM block 1. Here's the macro to do that, and it accepts a 0 or a 1 as value:

All Kernal routines etc work with RAM block 0, so why you would want to do this, I do not know.  I accept all tips regarding this subject!


The VDC registers are absent, its registers cannot be found in the C128 memory map, except for these two: $D600 and $D601. The VDC Video RAM and registers are isolated, and are accessed via these two locations. Nothing you can do with the MMU will change the way you interact with the VDC.

Programming it is kind of a hassle, so this is where macros and some handy subroutines should make this more easy. We'll get back to this later on.


When planning a program for the C128, it's wise to think about the memory layout beforehand and select or create the Bank configuration that best suits the program.  It's a good idea to draw a map like provided above, and fill in where the program and data will do. You can use the provided document I've shared (see the link at the top of this article)

If the VIC configuration needs changing because of the fixed location of data, then selecting another 16K block or tuning the location of character data and screen data will help.

This can now easily be done using a few macros that will generate the necessary code.
Getting this out of the way will make it easier to understand the machine and plan for new programs.

Next up is programming the VDC chip. It's lovely.